I am not a huge train fan, unlike some of my friends, but I do enjoy the infrastructure that rail service - be it freight or passenger - brings to a city. 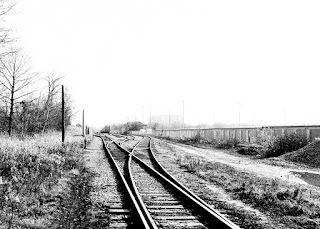 Today was a day for wandering around on the bike with friends. The Santa Claus parade was this morning, bringing in officially the start of too many decorations and the over playing of seasonal music. Coffee was, as usual, had at our favourite coffee shop in Uptown Waterloo. Errands were run. A picture taken. North of 40km was put on the bike. I realized I am not going to beat last year's mileage total of 8345 km sadly. I will be on target though to have at least 16 000km on my bikes and legs during the time spanning the 23 months prior to this coming up Christmas, which is a lot I suppose. So I will come near to matching it. There are 7100km, give or take a couple, on the legs thus far this year, but I suspect that time won't allow me to get another 1300 by New Year's.

It is my plan to leave early in the morning with camera in tow and take some pictures of some fog. We are due for some below zero temperatures with fog and clear skies above. Often, those conditions provide some simply gorgeous skies and wonderful light.