Waterloo Region is getting some things very right regarding my favourite way of getting around the place.

This makes me happy.

For one thing, increasingly, there is a recognition that the bicycle is a valid transportation option. We are slowly getting more MUPs built which actually go someplace vs purely for recreation MUPs in suburbia which seem to just go in circles within one large suburban block.

A new(ish) MUP style, for here anyways, is in place on Fischer-Hallman Road which formally divides pedestrian and cycling traffic and attempts to ease some congestion. The idea is to make things safer for all trail users and see if people want or will use MUPs which link together existing trail infrastructure. This idea is not new, and has been in place in other parts of the world for decades. But it is very nice to see it happening here at last.

Also, the Region, in conjunction with its planners and The Working Center, have hired some bicycle ambassadors to hang out in places that bicycle riders are and, well, be friendly to people. 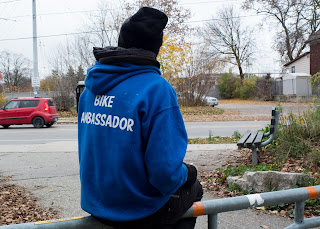 Here is one, perched atop one of Kitchener's trail blocking gates along the Iron Horse Trail. (I am not a fan of these stupid things - they are dangerous, and have contributed to injuries in the past and one person's death.)

These ambassadors meet and greet people and are there to promote cycling safety by educating bicycle riders on how to ride in a safer, legal, and more friendly manner. Motorists are also being given an education under this program.

Personally, I love it. My friends and I have been trying for a while now to figure out how come the cycling community, such as it is, seems to be on the receiving end of harassment on the road ways of this region. The idea is that if we could understand what motivates some people to act in a psychotic manner, that we might be able to come up with actual workable solutions to a real problem on our roads instead of just becoming upset. We made the following observations:

So what to do?

A basic understanding that everyone is just trying to get someplace and would like to do so in peace would be a good way to start. How someone chooses to move about does not matter, what matters is that they want to do so in peace.

Something else to think about though.

Cyclists take note - you are not being picked on by people in cars. Honest. People in cars who "teach you a lesson" by getting too close, buzz you, honk in a way to cause you to startle, cut you off, etc are not giving you any special treatment. They do this to other people in cars as well. Just watch traffic carefully sometime. Some people just, as they said in the movie Groundhog Day, drive angry. Sadly, the consequences of this behaviour almost always end in tragedy for everyone involved when a car connects with a bicycle. It would not surprise me if those on bikes who break seem to break every rule in the book would do so in a car as well. It is people, not their chosen mode of transport, that is the issue.

Which, in a round about way, brings me back to the ambassadors. They are wonderful. cheerful, and put a happy face on the cycling world for both users of bikes and others. They are giving out these nifty booklets as well to help educate people on bicycles. Here is a pdf of it from the region: http://www.regionofwaterloo.ca/en/gettingAround/resources/CYCLING_SAFETY_BOOKLET.pdf

It contained no surprises for me, but is a very good idea for those who may not be aware of what it contains.