in quest - a photo that moves

Perhaps it would help if I explained my process to you.

The first thing which I do when creating a moving image is to pick a subject matter. Lately, the subjects that move me most are people. I am naturally shy, and find shooting people in a manner which will result in the picture I want to be very daunting. I prefer to observe rather than be in someones face. But people are so varying, and endlessly interesting, and therefore make compelling subjects for photographs. Their faces tell stories and sometimes, given the right expression, a simple picture of someones face can speak volumes. I like photographing people because I like to tell their stories with a visual medium and through that, hint at my own. 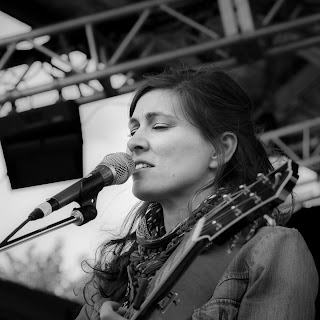 In the case of the picture above, I was not specifically seeking out this musician to take a picture of her, but since I was at the 2013 Hillside Music Festival taking pictures of musicians, I was in a sense there for this shot.

When I see this picture, I remember her music. She has a beautiful voice, and throws herself into what she does - the goal with the pictures I took of her was to convey the depth of emotion I heard in her music into a visual medium. Somehow I wanted to capture the essence of her performance in a way that would move the viewer a fraction as much as her music moved me.

Having a suitable subject matter (in this case a musician playing her music) is all well and good but so what? There are literally millions of subjects out there that would make good to excellent photographs. But a photograph which has the power to move is one in which there is more to it than simply a good subject matter and well executed photographic technique. Remember, well executed photographic technique has little to do with how "sharp" a picture is or any other such measurable metric, but how well the photographer's intent in making the picture in the first place is conveyed to the viewer.

When I photograph musicians, I look for musicians that are doing more then just mechanically playing their instruments and singing their songs. This is also true, incidentally, when I look at other forms of creative expression. I seek ones which put their very being into the creation of their art. This does not mean that they are falling to pieces all over the stage, or dropping dead at the end of a set (but it can), but rather that they lay themselves bare somehow on stage and show a bit of their real selves to people watching and listening.

Once I find such a musician, I stay and focus on how they move, how they communicate with the crowd, and once I find that, I take multiple photographs from different angles until I get what I am looking for.

Back home, at my desk, I am then faced with the daunting task of sifting through the day's shoot. Much of what is taken is discarded. As my technique has improved over time, fewer and fewer photographs are discarded due to technical or compositional flaws and more are discarded because they simply do not communicate what I want to communicate with that picture.

I try and distill the picture collection down to ones that make me feel like the woman in this picture does: 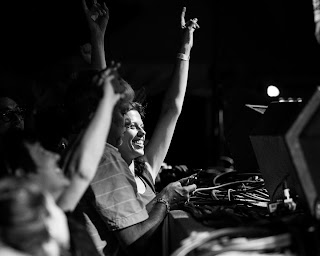 Email ThisBlogThis!Share to TwitterShare to FacebookShare to Pinterest
Labels: Photography