It is true. More people are bringing bicycles into the Uptown than ever before (I base this on what I have seen over the last few years having grown up down there, and having used the place as the setting for most of my social life over the past few years) and this puts pressure on parking facilities.

The city has provided, in its parking garage in the Uptown, a series of racks under cover suitable for parking bicycles. They are in a lit area, out of the worst of the weather, and are bolted to the ground. The usual bicycle rings seen in most urban areas are scattered about, a few per city block. There are two sections of racking at the mall entrance by the grocery store.

The problem is, often, the racks are filled up. One of the advantages of cycling is that you can, usually and traditionally in North American cities anyway, park right outside the place you wish to visit. This is not often possible, of course, with the automobile which is one of the main attractions of cycling in a crowded urban environment. This tendency to park right outside where you want to visit means that the grocery store racks are often filled to overflowing, racks or rings by coffee shops are almost always taken, and the city garage parking, arguably the best there is in the Uptown, often sits partially empty to empty. There are a couple of bikes that are there often - likely owned by commuters to the Uptown - but the racks are rarely full in there. There are no shops right beside the garage. People have to walk a bit, and in the eyes of many, that defeats the purpose of the bicycle. 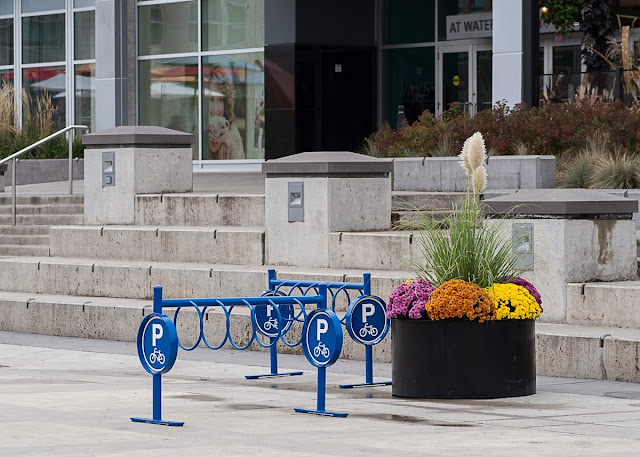 These racks are located, for now, in Waterloo Square right in the middle of the Uptown. They are temporary in that their location has shifted around over the past few days. They are also not bolted down to the concrete. I like them for a couple of reasons.

I first noticed these racks here over the weekend when the region was showcasing a full size model of the LRT trains from Bombardier that we are getting in the nearish future. I wonder if these racks are going to be what is used at the LRT stops for people to use. I hope so. I also hope though that they are scattered around the Uptown liberally in the next few months. This is very much a case of "if you build it, they will come". Provide decent parking in highly visible places, and people will use it.

Secondly, they hold a lot of bikes - It would be easy to squeeze 12 bikes on one rack. Put two of them in a parking spot at the edge of a parking lot and you could house 24 bikes. Since many people (dare I say most?) when they use cars travel one person in one car, one parking space filled with bike racks like these could replace 24 parking spots dedicated to cars. That is pretty space efficient. It could be done, and is in other locations.

Arguably, the best feature about these racks is the sign itself. Because it is very similar to what is used to indicate car parking, and it is to be used by bicycles, it furthers the argument that bicycles are just traffic like anything else. This is very important as we are living in a city which has a lot of conflict between people, aided and abetted by local media, based on their mode of transport.

The more people come to recognise that all modes of transport are equally valid, the safer urban travel will become for everyone.

So more please. More signage that levels the playing field. More parking for bicycles. And, hopefully, more decent behaviour by people regardless of their mode of transport.
Posted by Unknown at 14:55