On snow and the need for Frankenfenders 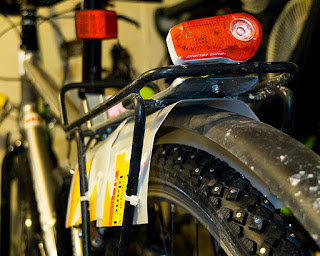 Here is the Frankenfender MKII. MKI Frankenfender was great, but had a problem in that the whip part (shown here - the front fender off of a cheap set of mtn bike snap on fenders) was too narrow and my back, rack, and bags were getting "trashed" when riding in the snow with the new and improved huge snow tires of doom. The problem that required the reinstallation of the Frankenfender MKI was the fact that the new tires simply could not be mounted in a standard fender without the studs picking. There would have been no clearance for snow or water and this would have resulted in some serious spray back and annoyance. So, after some experimentation, I decided that the good old "slice the vinegar bottle in half and bolt it to your bike like a geek" approach was much preferred to being wet.
Makes me want to get out on the bike and see if I stay dry!
Posted by Unknown at 20:32